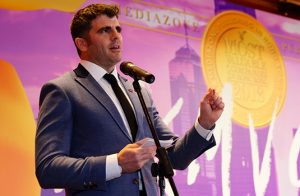 Luigi La Tona was dressed to impress—tie on, teeth brushed, cologne applied—when his roommate found him sitting in the living room of their shared Vancouver rental house, waiting for a phone call. Luigi was about to interview for a co-op position with Hugh Stephens, a senior VP at Time Warner, one the world’s largest media companies.

For Luigi, the opportunity was a godsend. Already in his late 20s, he had a hodgepodge resume—he’d been a bartender, a firefighter, a scuba diving instructor—and had fought tooth and nail just to get into the UBC Arts Co-op Program. He desperately wanted this job, but the competition was stiff.

“Why the hell are you dressed up?” his roommate asked.

“I’m putting myself in the role,” a nervous Luigi replied.

That’s when his roommate checked a mouse trap in the kitchen. The call was due any minute. Sure enough, his roommate found a mouse stuck to a sticky trap. “Hey man, what do I do with this?” he asked. Luigi frantically waved him away. As his roommate attempted to dislodge the mouse, it squealed in pain.

Then the phone rang.

Despite the distractions, Luigi’s interview went well. He was soon on to the next stage: an in-person interview with Alvin Lee, then Executive Director for the department.

Luigi was once again prepped and ready, waiting at the appointed coffee shop and trying to look smart by reading the business section of a newspaper. That’s when Alvin threw a wrench in Luigi’s carefully crafted plan. Stuck downtown and running late, Alvin called and said, “Let’s meet at a bar halfway instead.” At the bar, Luigi sheepishly followed Alvin’s lead and ordered a beer.

“We talked about nothing on my resume,” Luigi recalls. Looking back now, he realizes that Alvin was assessing his emotional intelligence: where he’d shown leadership, what he’d shown interest in, and how well he could carry a conversation. At the end of their conversation, Luigi shook Alvin’s hand and said: “If I have the opportunity to see you in Hong Kong, beer and chicken wings are on me.”

A few days later he received a congratulations email from the co-op office: he was heading to Hong Kong.

“In Vancouver… the opportunities are really limited. Sometimes you need to leave in order to gain experience. That’s what the co-op work term allowed him to do. It was the best thing I ever did in my career.”
Greg Eidsness
Arts Co-op Alumni

Finding a Strong Sense of Direction

Before Luigi took his place in a long line of Time Warner co-op students—31 students have been placed over a decade and a half—Lisa Söderlund was the guinea pig, landing the first UBC co-op position with Time Warner in 2004. During her interview, she shared about her public policy experience at a previous co-op with Citizenship & Immigration Canada.

Despite being a confident traveler, having lived and travelled throughout Europe for four years, she felt an “enormous culture shock” during her first weeks in Hong Kong. The city was loud, and the apartment rental she’d arranged “felt like a birdcage with nothing in it.”

Still, she was driven by the opportunity: a chance to add concrete experience behind her Canadian Studies undergrad. The switch from academics to a business setting stretched her, but Hugh was impressed. She brought analytical and writing skills into the role, so-called “soft skills” that Time Warner found valuable.

For Lisa, the opportunity helped launch her successful career in corporate social responsibility (CSR), including her current role as a CSR consultant. “The experience gave me a strong sense of direction,” Lisa says.

That was what Greg Eidsness was looking for when he succeeded Lisa the following year. “I had no idea what I wanted to do when I graduated,” Greg says.

Like Luigi, Greg had struggled to find professional work experience to build his resume. He took odd jobs between semesters. “One summer I cut lawns. One summer I was selling knives door to door. I would’ve worked at a coffee shop if someone would’ve hired me,” he says.

“In Vancouver… the opportunities are really limited,” he says. Sometimes you need to leave in order to gain experience. That’s what the co-op work term allowed him to do. “It was the best thing I ever did in my career.”

Hugh Stephens never had a mentor. He started his career before co-ops and internships were the norm, and when he first joined External Affairs, found himself in junior positions, given little guidance, and frustrated at the lack of responsibility he was granted. “I had a couple of university degrees and made a big commitment to working in foreign affairs,” Hugh says. “And here I was staring at a wall. I could have used a mentor. ”

Flash forward to his time at Time Warner as Senior Vice President, Hugh refused to use the term “intern.” He recalls a meeting early on with one of the co-op hires, where people were introducing themselves around a room. They said, “Well, I’m just an intern.” Hugh corrected them. “You’re not just an intern, you’re a policy analyst.” He printed business cards with their title and treated them as a full-time employee. He gave every UBC co-op employee substantive projects: Lisa developed Time Warner’s CSR framework, Luigi worked with external partners on intellectual property rights, and Greg developed an anti-counterfeiting brochure that won an industry award.

Yan-Min Xu worked with Hugh on an anti-piracy screening program. She recalls Hugh going the extra mile to pay for classes or seminars while in co-op, and encouraging her to network. Yan-Min was shy growing up and she had found networking intimidating. But, she says, “By the end of it I wasn’t feeling very nervous going up to people, introducing myself, and talking to people.” The confidence this gave her was a revelation. She recalls thinking, “Oh, I actually like meeting new people.” This crucial skill opened her up to a career in financial planning, where she meets with clients regularly.

Hugh is an alumnus of the UBC history honours program, and describes the opportunity to work with the co-op program from his alma mater as “serendipitous.”

“I was happy to be able to create these opportunities for arts students because I truly believe, based on my own experience, that they have broad adaptable skills,” Hugh says. But hiring UBC co-op students wasn’t a charitable act. If the first candidates hadn’t worked, he says, “we would have probably have gone elsewhere.” That wasn’t an issue. “I was glad that the UBC Arts Co-op program became our ‘default’ go-to institution,” he says. “My experience is that successful arts graduates have the adaptability and the aptitudes to take on a variety of tasks, applying the skills and approaches to problem solving that made them successful academically.”

Hugh sees co-op positions as a two-way street: provide meaningful work and adequate supervision and receive reliable results in return. “If you know a person is reliable and can do a good job—that is gold in the business world,” Hugh says.

Both Greg and Luigi have come full circle to hire co-op students in their future jobs.

“Co-op students are awesome,” Luigi says. He lists their social knowledge, communication skills, ability to research, and general knowledge base as boons to business.

It’s a cost effective way to find high quality employees for a short time, says Greg. “It’s also a nice way to look for potential employees over the long term.” The position can be a trial for long-term commitment.

Yan-Min found it was a great way to try out jobs as an employee as well. She had eyed a career in government, but after two co-op positions in the public sector that preceded her time at Time Warner, she was having second thoughts. “That saves a lot of time afterwards in real life,” she says.

The Secret to Success

“I’ll tell you a secret,” Luigi says. “The things you learn matter, but the network you build matters even more.” The irony is that 12 years after seeking a co-op position to boost his resume, he hasn’t used his resume since.

Luigi, Lisa, Greg and Yan-Min all cite their time at Time Warner with boosting their confidence, growing their networks, and setting them up for future success. Lisa followed the aforementioned path toward CSR consultant; Greg returned from Hong Kong to spend a decade with BC’s Ministry of Trade before moving to the private sector; Yan-Min has built a successful career in finance at Manulife Securities.

At Time Warner, Hugh had a habit of immediately connecting students with the Canadian Chamber of Commerce upon their arrival. Luigi began volunteering as a co-op, and soon after landed a job there. After that it was another connection, then another. Now he is the Chief Operating Officer of StorHub and is concurrently pursuing his Executive MBA at the National University of Singapore.

One of the advantages of hiring through UBC co-op is they pre-screened candidates. Hugh also made previous overseas experience a requirement, to reduce the risk of homesickness.

Time Warner hired for the maximum term of 8 months, and kept the co-op hires on for an extended period of time. This reduced the amount of time needed to train new co-ops.

3. Look for Self Starters

With a small staff and a full workload, Hugh didn’t have time to assign new work every day. Instead, he assigned a handful of projects with specific goals in mind, and let them get to work.

While Time Warner never had an issue with co-ops, Hugh knew that there was always a degree of risk when hiring long-distance. Some things are out of your control.

While UBC co-op students bring adaptable skills into these roles, they all have slightly different strengths. Hugh found the fit worked best when the roles could be adjusted to suit the individual.

Treat co-ops as members of your team by investing in their professional development. “Whether they end up working for you over the long-term or it’s a short-term relationship… they’re both worthwhile,” Greg says.

8. Be Generous with Your Time

“It’s an honour to be asked… ‘I want to learn from you,’” Luigi says. Every leader should be generous with their time and willing to build up future leaders.

“You have to be able to give them something that they want to learn,” Luigi says. Put yourself in their shoes and create opportunities that will inspire their best work.

Co-op positions can be used as a trial period for full-time hires. You get to know the individual and their performance. They get to know your company. The result can be mutually beneficial.

To learn more about hiring a UBC co-op student, go to www.coop.ubc.ca 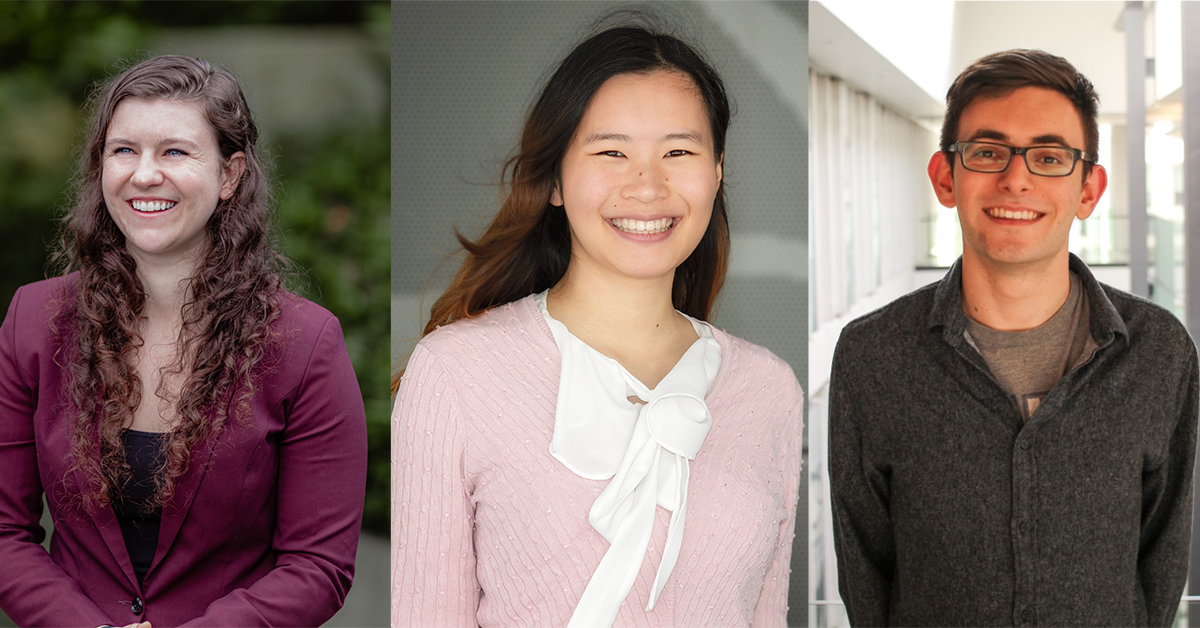